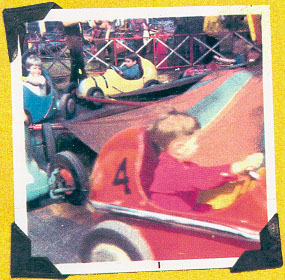 In 1993, long-time friends Paul Donovan and Cory Verner together
turned their musical interests into a professional pursuit.
At the same time Steve Pratschner and Keith Andrew put their own
musical skills together. And when the duos met, Dryve became the
merger of their talents. Pratschner's brothers David and Michael
were soon added and the band debuted on the San Diego club
circuit as opening act for the likes of Jeff Buckley, Lowen and
Navarro, Suzanna Hoffs, Jars of Clay, Possom Dixon and others.
In 1994 Dryve independently released their first CD "Hum" which
receieved excellent local reviews and strong San Diego radioplay.
After a shared bill with SaraBellum Records modern rock trio Black Eyed
Sceva, Dryve was courted, and successfully signed to the young
SaraBellum Records. In Feb. 1997 Dryve released their first national release
"Thrifty Mr. Kickstar" which was well received by audiences as they toured the country to
promote it. The single "Nervous" charted nationally on college radio as well
as CCM charts and AAA stations. "Thrifty" also won the "Best adult alternative" album
category in the San Diego music awards. The highlight for dryve's touring life was when
they had the honor of touring with the Call in Oct. of '97. Dryve called it quits in Jan.
of 1998.